Go FAST Boat: Pros and Cons of a Planing Hull 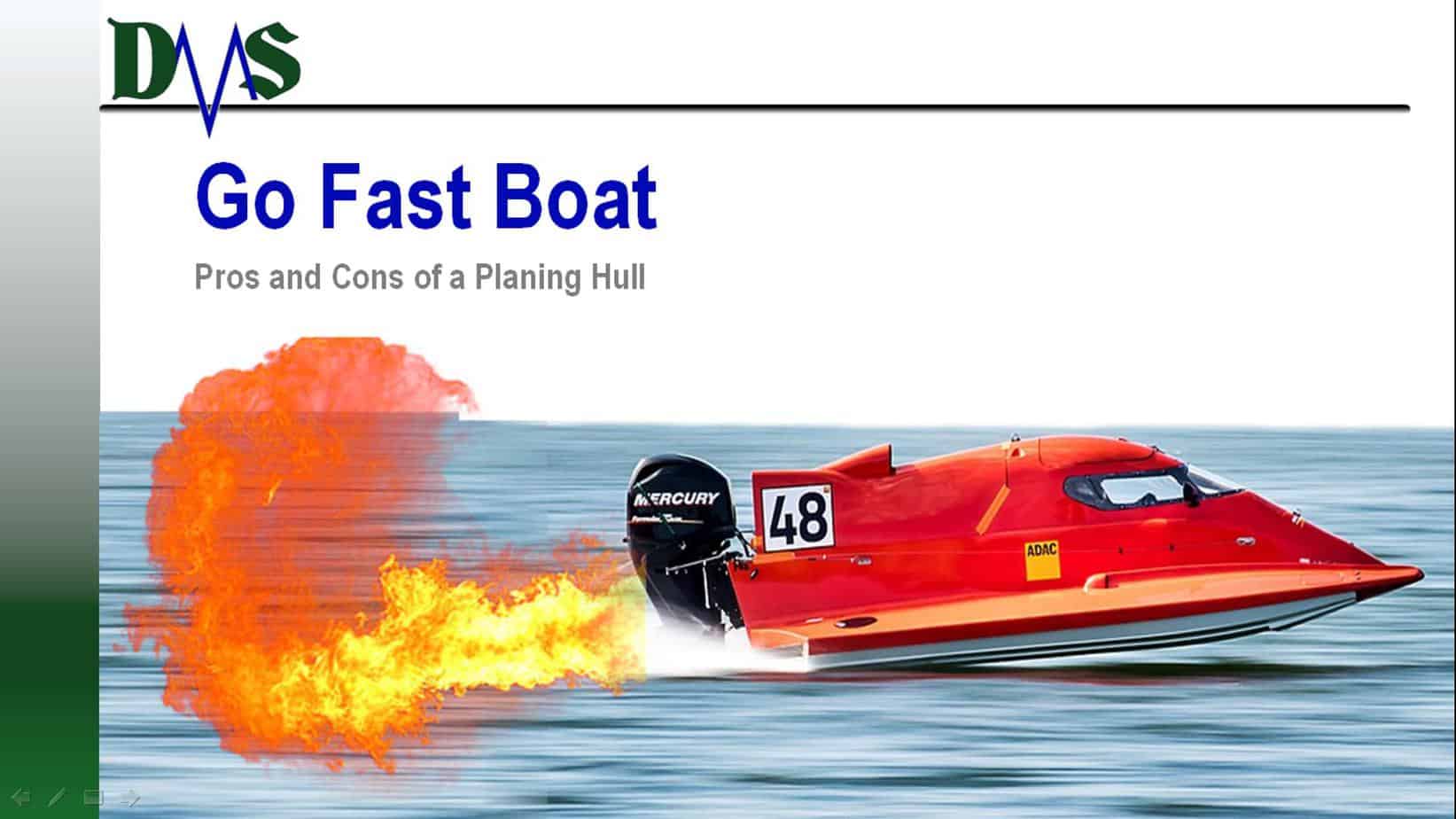 ZOOM!!!  No better way to describe planing boats.  They pack very fast speeds into a very small package.  Many planing boats achieve speeds well beyond the limits of larger craft.  How do they do it?  And what are the penalties for this extreme speed?  Discover if a planing hull fits your next design.

Planing boats act completely differently from other types of displacement hulls.  Displacement hulls depend on hydrostatic forces to stay afloat.  They sit at the same draft regardless of their speed (ignoring some secondary effects).  But planing hulls utilize a combination of hydrostatics and hydrodynamics.  As their speed increases, they rise out of the water. (Figure 4‑1)  Less hull in the water means less resistance, allowing the planing boat to achieve even faster speeds.  Designers regularly create hulls capable of 40 – 60 knots.  A planing hull is a speed demon!

What magic do these hulls employ to rise out of the water?  What do they do differently?  It comes down to two ingredients:  hull shape and speed.  Displacement hulls try to minimize disturbance to the water; pushing the water sideways creates resistance.  Conversely, planing hulls maximum water disturbance.  Except they push the water down.  When this happens, the water pushes back up on the boat hull.  Shove around enough water and your boat rises out of the water.  This trick doesn’t work all the time.  That is why we need the second element:  speed.  At low speeds, pushing the water around just adds to your resistance.  Only at high speeds do we overcome the resistance and achieve planing.

Shoving water around is why planing hulls all trim aft.  They form an underwater wedge that drives forward, pushing water down and out of the way.  Boat goes up, and resistance goes down.  This magic does have its limits, including size limitations.

Beware death by cubes and squares.  Planing hulls will never scale to larger sizes without limit; they suffer from something called the cube square law.  Imagine a small planning boat about 3 m in length.  Picture how the weight changes as that boat scales to larger sizes.  Ignoring all the complexities, we generally assume the mass scales up by the cube of the vessel size.  Double the length and weight increases eight times larger.  We have to balance that weight increase with the planning surface of our hull.

Consider how the hull changes as our ship scales up.  The hull is basically a surface area, which scales up by the square of the vessel size.  Planing force basically ties into surface area.  Double the length of the ship and planing force only increases four times.

That creates a problem.  The weight increased by eight times, but the planing force only went up four times.  We don’t have enough planing force to support our weight.  That is the curse of the cube square law.  We recognize that no matter what, at a certain size, the planing force fails to support the boat weight.  Planing hulls suffer from size limits; you will never scale them to massive ship sizes.  Practically, most planing hulls top out in the size range of 20 – 24 m.

Provided you accept the size limitations, planing hulls have a lot to offer.  These boats scream fast; imagine the fighter jets of the boat world.

Performance comes with challenges.  Due to the cube square law, planing hulls tolerate very little weight.  These are not cargo haulers.  Once you add in the engines, fuel, and crew, these hulls accommodate very little extra.  Capabilities remain more limited when accommodating the ocean environment.  Planing hulls face many unique design challenges.

The introduction of planing creates a new problem for balancing the boat.  On a displacement hull, we balance the weight distribution around the center of buoyancy (COB).  Thankfully, this COB remains fairly stationary with changes in draft.  But on a planing hull, the center of effort shifts further aft as the hull rises out of the water.  This forces the designer to balance most of the boat weight near the transom.  At extreme speeds, the effect becomes so excessive that the engineer completely redesigns the hull shape to compensate.  Planing hulls require constant vigilance and active interest in maintaining the boat balance.

These high speeds introduce a new threat from ocean waves:  slamming.  Merely an annoyance on displacement hull, slamming graduates into a serious structural threat for planing hulls.  A wave rockets up and explodes against the side of your hull.  All the energy of the high speed boat compresses into a single wave impact.  Imagine a high-speed car crash with the water.  And then keep doing that 3 – 5 times every minute.  These extreme forces require extensive structural reinforcement, or they may quickly destroy your hull.

Another side effect of slamming is the extensive operator fatigue.  When a wave slams against the hull, the boat slows down very quickly.  The rapid change in speed yields very high accelerations.  Imagine 3g of acceleration in just 13 ms.  Although they last for a short duration, operators experience the same levels of acceleration seen on fighter jets and rocket ships.  Protecting the crew often requires special motion isolation chairs, which may cost thousands of dollars each.  Most often, planing boats get limited by human endurance long before any structural limits.

Where to use a small high performance hull form?  The obvious choice leaps to mind:  recreational boats.  Planing hulls are fun.  They allow great activities like sport fishing and water skiing.  We find many other applications where a boat travels fast.

Despite the size limitations, planing hulls fill a large niche in the maritime industry.

Power.  Speed.  Performance.  These buzzwords fly around the concept of planing hulls.  They promise incredible capabilities and adjust to a wide range of mission needs, unless the weather is bad.  Seakeeping, slamming, and low deadweight capability frequently plague planing hulls with design challenges.  They demand a higher precision in the design effort, because larger size offers few solutions.  Planing hulls always run against size limitations due to the cube square law.  But if you accept these limitations, the planing hull compacts large capabilities into a small package.  Sometimes smaller is better.