Why We Care About The Ship’s Propeller

Propellers By the Numbers: Propeller Dimensions 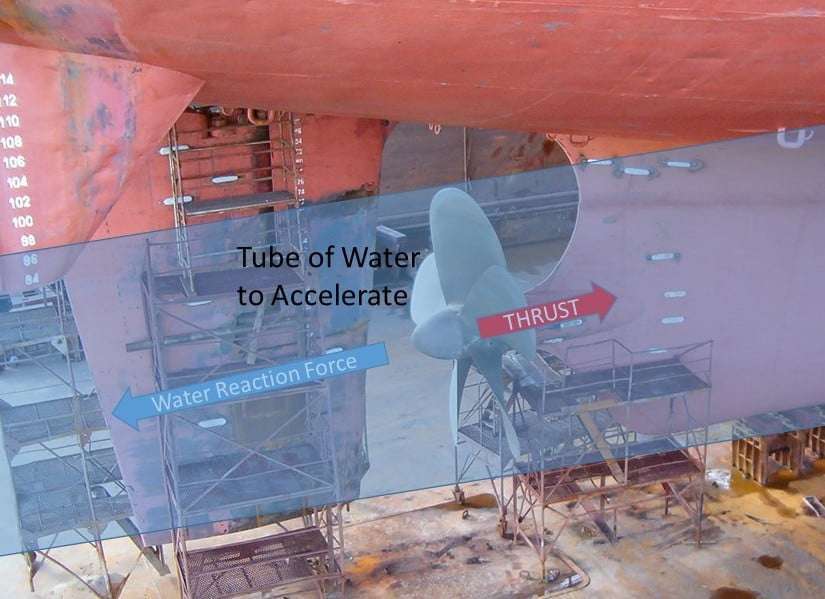 Propellers are a zombie technology.  They still work great, but you will never see a major advancement in propeller efficiency.  The propeller reached its limits, which makes it very hard for manufacturers to convince you that they have the best propeller.  They try to confuse you with a dizzying set of fancy graphics and made up terminology.  To fight all that confusion, you need to understand the basic physics of how propellers work, and resulting propeller limits.

1.0 The Physics Behind Propeller Efficiency

The full explanation of the propeller slipstream is fairly complicated, and fluid mechanics people usually need to resort to math.  If you happen to be a math person, this is a very satisfying explanation, involving many Greek symbols.  But for the rest of us, we should stick to a physical analogy which is not perfect, but conveys the main idea.

For the moment forget all the details of how a propeller produces thrust.  We know that a propeller must produce thrust, pushing the ship forward. (Figure 1‑1)  Newton’s 3rd law reminds us that if we want a thrust force, there must be an equal and opposite reaction on the water.  Imagine a ship fixed in place in the water.  To get a thrust, the water must shoot out the back of the propeller faster than it entered the propeller.  That acceleration of water creates thrust.

Ideally, we want to have a tube of water the exact same diameter as the propeller.  Water in this tube travels downstream towards the propeller, gets accelerated at the propeller, and shoots out the back.  But fluid mechanics is not ideal.  What really happens is that water inside our tube accelerates from upstream, moving faster as it gets closer to the propeller.  But all the neighbors from just outside the tube of water notice exciting things happening.  The surrounding water wants to come along for the ride.  It tags along and slows the entire operation down.

We now pay a penalty for all that surrounding water.  We have to accelerate that greater mass of water back up to speed just to keep up with the propeller.  Only when it finally reaches the propeller can we generate thrust.  In the end, our chunk of water is not a straight tube.  It starts out the same diameter as the propeller, but it expands as we move upstream.  This is the propeller slipstream. (Figure 1‑2)

The key thing to notice is that none of the predictions for efficiency even mentioned the propeller design.  The maximum efficiency limit has nothing to do with the shape or speed of the propeller.  This is just the limitation of how an axial flow propeller works.  Betz limit and the slipstream:  the curse of propeller physics.

Although we can not completely blow away the propeller limits, we do make a few modifications to get some modest gains.  Up to now, all the discussion assumed the propeller was magically suspended in the middle of the ocean, with open water all around.  But we know that real propellers are mounted close behind the hull of a ship.  That close proximity creates some interesting interactions between the propeller and ship.  Some help efficiency, and some hurt it.  The three main interactions are wake fraction, thrust deduction, and relative rotative efficiency.

If a ship moves forward at 16 knots speed, the propeller does not see water traveling at 16 knots.  This is due to the wake fraction.  The water slows down as it fills in the gap behind the stern of the vessel.  So if the ship travels at 16 knots, the propeller may only see water moving at 15 knots.  (Figure 2‑1)

We measure wake fraction as a ratio of the reduction in water speed at the propeller, compared to the ship speed.  Wake fraction typically varies from 0.03 – 0.20.  Wake fraction is a good thing.  Propellers generally are more efficient when the oncoming water stream moves slower.  And remember that it only depends on the hull, not the propeller shape.

The problem of this low pressure gets attributed to the propeller.  This is an organizational convenience.  Naval architects typically like to keep the hull and propeller separated as different concepts.  So we count this suction force against the propeller instead of the hull.  This makes it easier for different engineers to specialize and work together.  We count it as a deduction to the thrust of the propeller.

Thrust deduction gets measured as another ratio.  This time we count it as the ratio of that extra drag force compared to the propeller thrust.  It would be nice if this were a small number, but the thrust deduction is typically somewhere between 0.05 – 0.20.  That’s a 5% – 20% penalty for placing the propeller directly behind the hull.

The relative rotative efficiency finishes the set of efficiency modifiers as something of a catchall for secondary interactions.  The wake behind the ship is not a uniform speed.  This means that the propeller blades see different water speeds as they rotate around.  When the blade is vertical, it sees slow water directly behind the stern of the ship.  Compare this to the relatively clear water exposed with the blade horizontal.  All those little variations affect the torque required to spin the propeller.  We call this relative rotative efficiency.  The ratio of the propeller torque behind the hull compared to torque when tested in open water.

Relative rotative efficiency can be either good or bad.  This ratio varies from 0.95 to 1.1.  Values below 1.0 are bad, showing that the propeller performs worse behind the hull.  Although it is very common to customize the propeller to the specific flow patterns of your vessel.  In these cases, the relative rotative efficiency may be above 1.0.  That’s a good thing.  It means your propeller does better behind the ship hull.

Wish all you want, but propellers will never get significantly better than they currently are.  They remain forever limited by the fundamental physics of fluid dynamics.  No manufacturer can provide a miracle device to double your propeller efficiency.  A typical propeller will always be around 65% efficient, if used correctly.  The best propellers out there only push that to around 72% efficient.  When considering your next propeller, remember these limits and arrive armed with reasonable explanations.