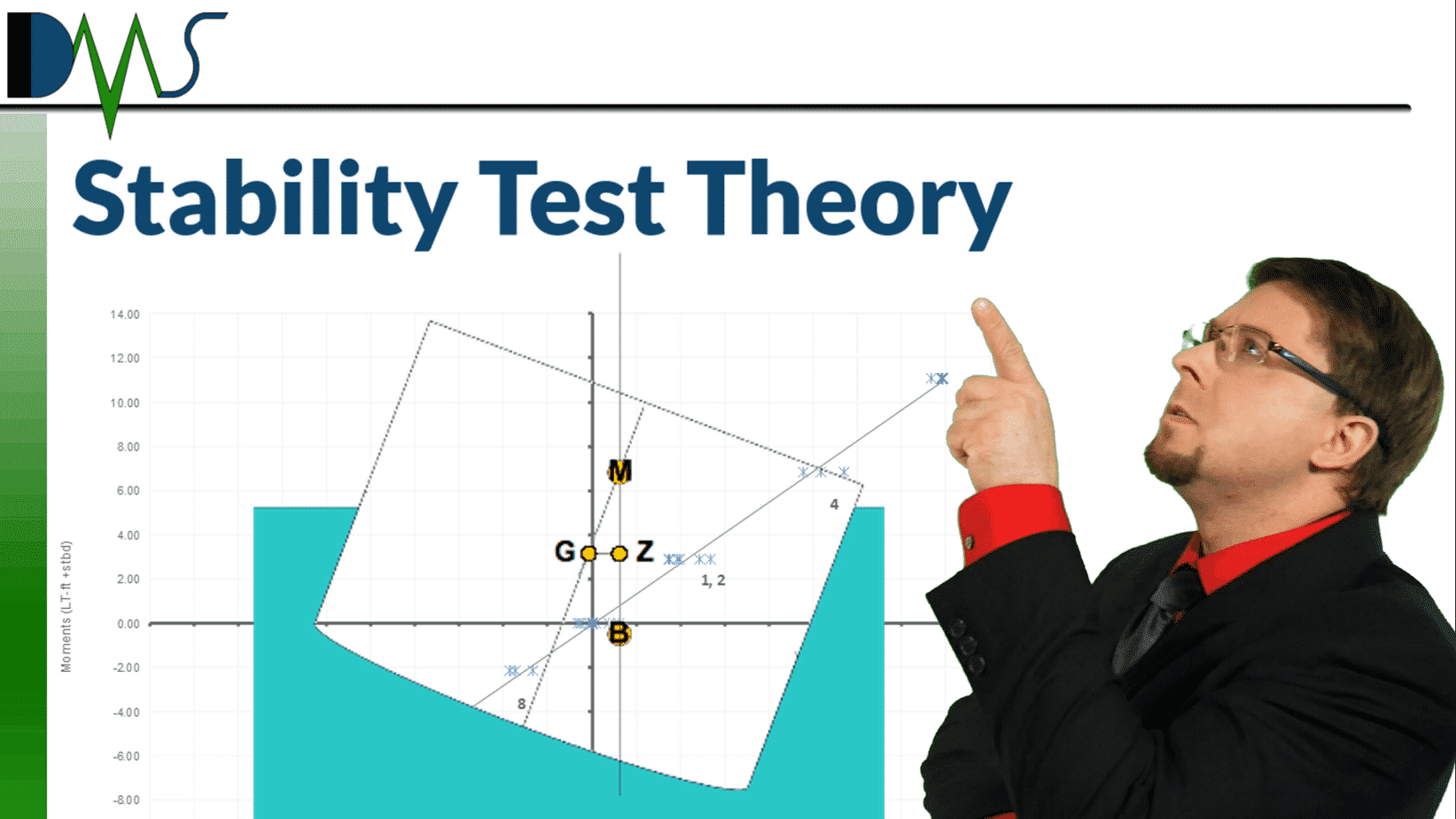 The Math Behind The Measurements

After you complete the stability test, we break out the black magic.  Once the stars align, we consult the oracle and interpret the portents to convert the test data into the light ship. . . .

Clearly, the actual math involves a far more mundane process.  But it does make you wonder.  What science could possibly link moving a few weights on deck with calculating the light ship weight?  Today I explain some of the theory behind the stability test.

This article provides the broad overview of the calculations and theory for a stability test.  But I don’t show the full mathematics, partly to protect DMS competitive advantage.

We want to calculate four critical numbers for the vessel light ship.

These four numbers completely define the vessel weight properties.  First, we calculate this information for the vessel, as-inclined.  This includes the light ship, plus everything that shouldn’t be there.  And then we correct for the extra items like deadweight, test equipment, people on-board, etc.

In the old days, any stability calculations required hand calculations and integrations along the lines plan, using Bonjean curves and Simpson’s Rule integration.  They were terribly cumbersome and laborious.

Thanks to computer technology, we have a better method.  We construct a 3D stability model from the lines plan. (Figure 2‑1)  This contains a 3D definition of the hull shape, defined in the stability analysis software.  The software performs those same integrations, but infinitely faster.  Once the computations became faster, we asked for better resolution and better accuracy.  Computers delivered.  The modern stability model is far superior to hand calculations in every respect.  Stability models have become an essential tool for the modern stability test.

Once we have the current waterplane, we punch that information into the stability model (draft, trim, and heel).  This is where the stability model really saves time.  It instantly calculates the vessel hydrostatics and reports the resulting weight, longitudinal center of buoyancy (LCB), and transverse center of buoyancy (TCB) to match that waterline.  When the vessel sits in equilibrium, the LCG must equal the LCB and the TCG must equal the TCB.  As a result, the hydrostatic properties tell us weight, LCG, and TCG.

Technically, this whole calculation is possible by just measuring three points on the ship.  But what if the measurement was wrong?  An error of even 10 mm can mean an extra 50 MT of weight for the ship.  So we need to be sure about our measurements.  That is why we take multiple freeboard measurements along the vessel length to calculate the current waterline for the vessel.

We still need one last piece of information:  the VCG.  This is also the most critical information.  Calculation of the VCG requires a two step process.  First, we calculate the GMT.  Second, we use the GMT to calculate the VCG.

So how do we determine the GMT from the incline experiment?  I first need to talk about the physical meaning of GMT.  Imagine the ship acting as a giant spring.  As you heel it over, the heeling moment slowly increases.  If the ship were a spring, the GMT would be our measure for the strength of that spring, called the spring rate.

At small heel angles, this analogy matches real life.  The ship demonstrates a very predictable and linear response as it heels over.  That’s good.  Linear responses mean easily detectable patterns.  This is the goal of the incline experiment:  calculate GMT.

GMT comes from the relation between righting moment and heel angle.  So we need to measure those two values.  By moving weights to different transverse positions on the deck, we create a known heeling moment.  We create that heeling moment without changing the total weight of the vessel at any time.  This is fundamental to the entire stability test and underlying theory.  The vessel weight remains constant throughout the entire test.

After moving the weights, the vessel heels over.  We very accurately measure the heel angle.  The most popular tool is pendulums. (Figure 5‑3)  We like pendulums because they can be constructed on-site and adapted to each situation.  Despite their simple construction, pendulums easily measure with an accuracy around 0.01 deg or smaller.

Combine the heel moment and heel angle, and you can produce a plot like Figure 5‑4, commonly called a tangent plot.  Everything builds to this tangent plot. The whole goal was to get that clear line on the tangent plot, because the slope of that line directly correlates with the GMT.  If you know the slope of the line, you can calculate the GMT.

After determining the GMT, we next convert that over to the important number:  vertical center of gravity (VCG).  Fortunately, there is a simple relation between GMT and VCG. (Equation 1)

We can determine KB and BMT strictly from the geometry of the hull shape and the current vessel draft.  The free surface correction adjusts for any slack tanks currently in the vessel.  The incline experiment just yielded GMT.  That provides all the missing pieces of the puzzle.  This yielded the all important value for the vertical center of gravity (VCG).

Sections 2.0 through 5.0 created a good starting point.  We now calculated a reliable number for the current weight and center of gravity for the vessel.  However, that is not the true light ship.  The as-inclined condition includes many unwanted weights in the calculation:

This is where the deadweight survey and tank survey come in.  Before the incline experiment, all of these items were meticulously detailed and tallied up.  We know the weight and location for all the outstanding items.  Now we apply simple weight / moment calculations to remove all those unwanted weights on paper. (Table 6‑1)

Moving concrete blocks across the deck of a ship doesn’t seem very glamorous.  It certainly fails to indicate the precise nature of a stability test.  And that is what I love about stability tests.  We don’t require fancy equipment or expensive testing facilities.  All we require is a little knowledge about the ship.  Armed with knowledge, we carefully exploit physics to achieve high quality science without the fancy equipment.  Now that’s efficient.

Ready to discuss your next project.  DMS is ready to join your team.

Naval architects work daily as systems integrators, but it’s difficult to point to any one system and show where this adds value. So today I want to review some T-AO UNREP equipment, and show how none of this is possible without systems integration.

END_OF_DOCUMENT_TOKEN_TO_BE_REPLACED

Ships evolved to require a combination of expertise from highly specialized disciplines. If you want a modern vessel, expect a modern team of experts. So let’s meet all the different roles and learn who it takes to create a modern ship.

END_OF_DOCUMENT_TOKEN_TO_BE_REPLACED

The physics of model scaling make it impossible to perfectly convert between model scale and ship scale. Learn how to get around the scaling correlation problem and convert from model scale to ship scale measurements.

END_OF_DOCUMENT_TOKEN_TO_BE_REPLACED

Time for an upgrade! Far beyond the single purpose testing facility, the modern towing tank expanded into a Swiss Army knife of experiments. Armed with new gadgets and advanced capabilities. Time to see what new tricks the tank holds for us!

END_OF_DOCUMENT_TOKEN_TO_BE_REPLACED

It may look like a swimming pool, but towing tanks exist for a different purpose. Dragging models down the tank propelled the science of ship design forward across the years. These pools deliver critical measurements for ship hydrodynamics. Discover why we pay such a high price for a fundamental tool of ship design.