Why Catamarans are Awesome

The True Cost of Steel 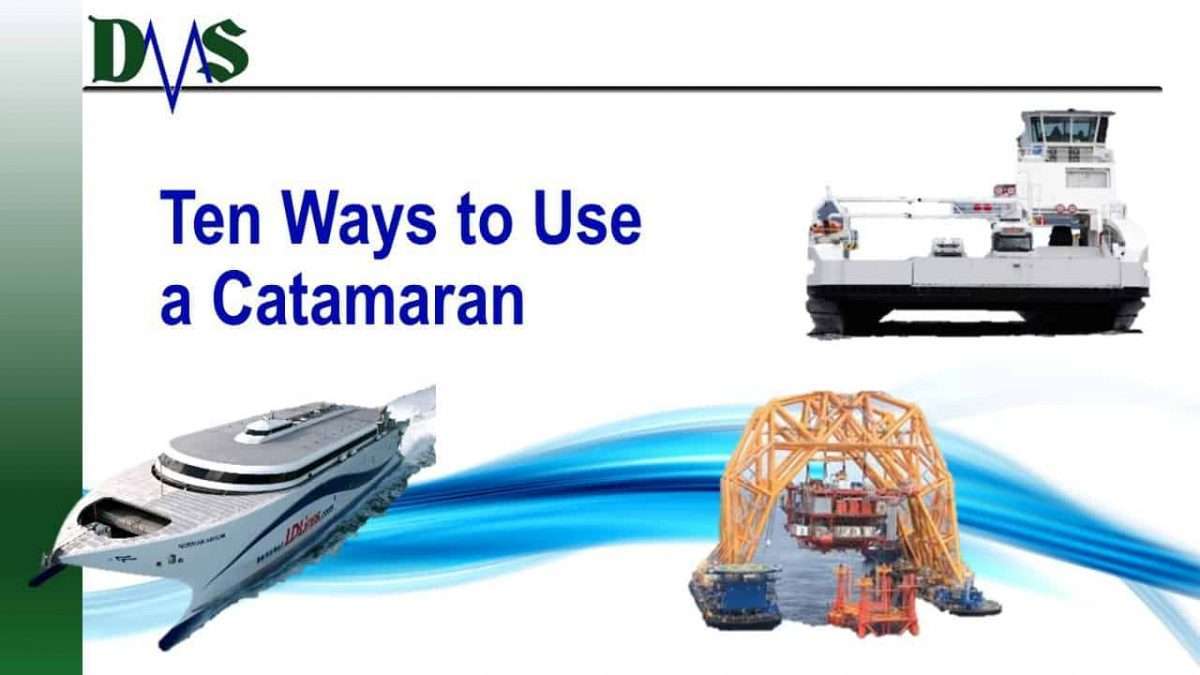 Behold the lowly catamaran:  a misunderstood and underutilized hullform.  Many vessel owners and designers associate the catamaran with fast vessels.  This grossly undersells the capability of the catamaran.  With a little creativity, the catamaran offers a cornucopia of applications.  By understanding the physics of catamarans, we reveal a whole new perspective on the advantages of the catamaran hullform and ten opportunities for improved vessel designs.  Maybe you can use a catamaran hull on your next vessel.

2.0 The Physics of Catamarans

What makes a catamaran unique?  Not the slim amas.  (Amas are the individual hulls on a catamaran)  You can have catamarans with massive amas.  The largest construction vessel in the world is a catamaran.  Catamarans become very serious heavyweights in industrial shipping.  The catamaran is unique for two important reasons:  high waterplane stability, and the cross deck.

Your vessel stability comes from the shape of your hull.  This is a combination two hull characteristics:  the vertical center of your buoyancy, and the shape of your waterplane.  For today, I will focus on the shape of your waterplane.  Normally, we want slender skinny hulls to reduce fuel consumption.  But for stability, you want to push that buoyancy as far away from centerline as possible.  A wider beam is more stable, in a big way.  Doubling the breadth of your hull can quadruple your transverse stability.  But there is a problem:  wider hulls have higher fuel consumption.

This is the genius of the catamaran.  By splitting the vessel into two amas, we separate stability requirements from fuel consumption.  We now get individual skinny amas, but separated by a cross deck.  This sends your stability through the roof, which is a great benefit!

The catamaran trick also works on heavy applications.  Consider a crane barge with a standard slewing crane.  Often, stability, not displacement, drives the barge size requirements.  You might pay for twice as much barge displacement as you need, just to get sufficient stability.  In this case, the catamaran can potentially provide the same stability but using far less steel structure for the hull.  You can fit the same stability into a smaller hull, which makes a less expensive vessel.

The cross deck is the second benefit of a catamaran.  This is the large flat deck that connects the two hulls together, which is excellent for low density cargos, like people.  Consider all the empty air of a passenger space compared to a tightly packed bulk cargo hold.  As cargo goes, people are very low density.  In these cases, the vessel size is not about supporting a heavy weight; instead it focuses on simply creating a large enough space.  These designs are driven by deck area.

The catamaran offers great freedom of deck area through the cross deck.  You can simply increase the separation between your amas to increase area.  This vastly expands the deck area with relatively little impact on fuel consumption.  This also applies to other low density cargoes like LNG bunkering.

In vessel design, we often talk about tradeoffs between conflicting ends of design requirements.  Skinny narrow hulls have low fuel consumption, but we need wide hulls for stability.  The catamaran removes many of these conflicts and offers the designer new flexibility to optimize your vessel.

3.0 Challenges of the Catamaran

The catamaran hull is not a silver bullet; it does have some downsides that are important to remember.  The three main downsides are the cross deck structure, righting energy, and faster vessel motions.

The sea generates some fairly extreme forces; building a hull to withstand them is hard enough with a conventional monohull.  But with a catamaran, our cross deck now has to withstand all the forces on the amas, separated by a large distance.  Bending and torsion of the cross deck become a major concern.  Especially when we try to fit all that strength into a relatively shallow cross deck. (Figure 3‑1)  Of course, we can always design a sufficiently strong cross deck, given a large enough construction budget.

For those of us without infinite budgets, economics often limit the separation between the two hulls.  Due to these limitations, catamarans typically have a length to beam ratio of L/B = 3.5 – 5.5.  This L/B ratio is not a hard number, because it also consider elements like vessel motions.  They are merely a starting point for a conventional catamaran.  But you won’t settle for merely conventional; you want the best.  A good naval architect can work to find the right balance for a suitable cross deck width.

The second challenge for catamarans looks back at another side of stability:  righting energy.  Often, a vessel gets hit by a strong wind, big wave, or other momentary force.  The vessel rolls over to dissipate the energy of that initial shock.  Like a spring winding up, the ship stores that energy as it heels and then rolls back to release.  How much righting energy do you need?  That gets complicated, depending on your ship and regulations of your flag state.  Let’s keep it simple for now and focus on one main fact:  when the deck edge submerges, righting energy becomes a losing game.  Most regulations requires sufficient freeboard to keep the deck edge above water, up to a specified heel angle.

Regarding righting energy, the width of a catamaran works against the vessel.  Imagine an oversimplified example:  say that regulations require a vessel to heel 40 deg before the deck edge goes underwater.  On a monohull with a beam of 10 m, that requires a freeboard of 4.2 m.  But a similar sized catamaran may have a beam of 25 m, which requires a freeboard of 10.5 m.  2.5 times larger, which means 2.5 times greater construction costs!

In addition to freeboard limits, we also worry about the worst case where an ama fully exits the water.  With one ama fully out, the center of buoyancy will not shift significantly for greater heel angles.  No way to generate greater righting moments, which makes it very easy to capsize the vessel beyond that point.  This focuses on draft issues, but stems from the same problem as freeboard:  catamarans are wide.

In reality, most regulations have separate rules for catamarans, but this shows that the width of catamaran may become its own worst enemy on the issue of righting energy.  No simple answers here.  Call in the professionals.  The naval architect works carefully to set a catamaran width that will satisfy the stability requirements without building excessively tall vessels.

The good news is that vessel motions can be largely separated from stability for catamaran design.  A naval architect has many tricks to take a catamaran with a short roll period and slow down those motions.  Here are some possible solutions.

There are many options open to a naval architect.  The key element is that each of these are add-ons.  They are not critical to the major design parameters.  You can correct the catamaran motions largely separate from deciding on vessel dimensions.  That flexibility is a major asset for design optimization.

4.0 Applications for A Catamaran

Combine the variable ama separation of catamaran with the huge range of possible ama  sizes, and the options are almost limitless.  What are some practical applications?

The catamaran is not a perfect hullform; it has strengths and weaknesses.  A good naval architect can properly apply these strengths and compensate for the weaknesses.  Ultimately, the catamaran offers flexibility, by separating several design elements that traditionally conflict on monohull designs.  This allows several untapped applications of the catamaran hullform, which leads to untapped cost savings for you.  Given the myriad of ways to adapt the catamaran hullform, it is almost always worth considering and talking to your naval architect about your next vessel.