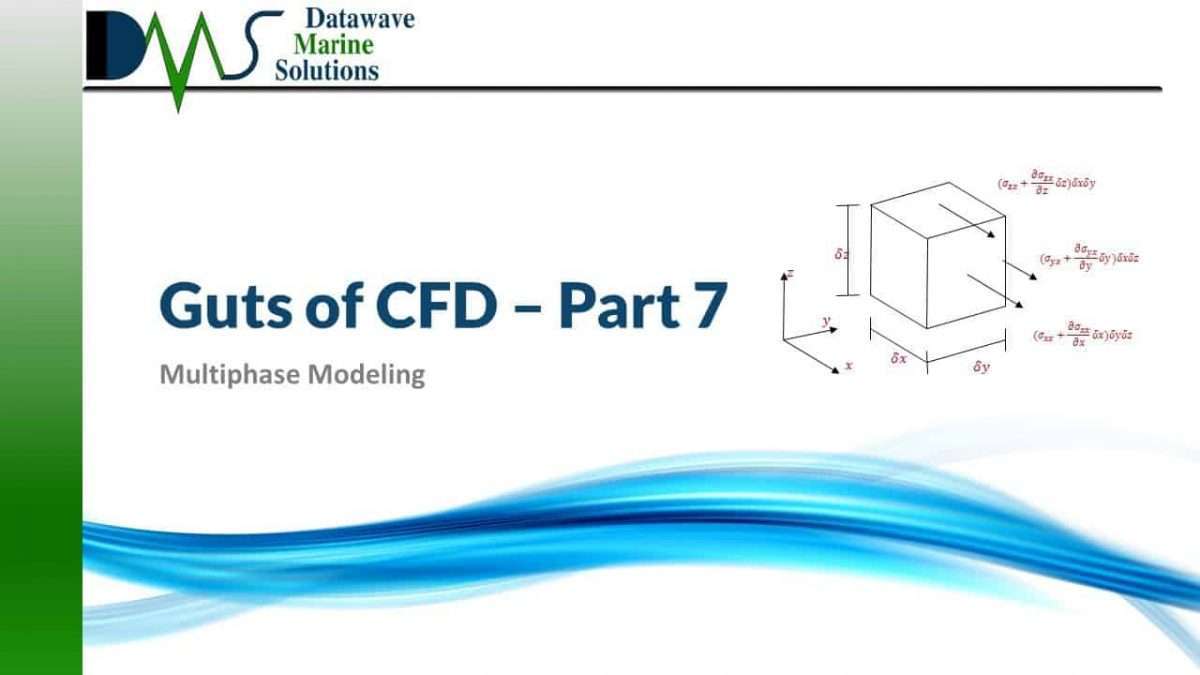 No two particles may occupy the same point in space.  No two fluids may occupy the same cell in a mesh. . . unless we use multiphase modeling.  In computational fluid dynamics (CFD), we often need to model scenarios that involve more than one fluid.  The volume of fluid method (VOF) allows the CFD solver to combine and mix multiple fluids together on a single mesh.  This article introduces the basic concepts of the VOF method and its implications for CFD modeling.

VOF assumes that every cell in the domain contains a fraction of each fluid.  (Fractions of 0 or 1 regularly occur.)  The solver creates a composite fluid for each cell, based on the fraction of each fluid within that cell.  VOF developed its own nomenclature to keep the terminology straight.

The entire composite of all materials is referred to as the generic fluid.

These transport equations capture the change in each of the fluid phases and couple that change with the momentum and continuity equations.

The volume fraction tracks the movement of the phases, while the remaining equations capture the forces on the fluid.  But there are two options on the exact method of combining volume fraction with momentum.

Macro scale methods occur in cases where the interface between the fluids stretches across multiple cells.  The interface can be defined by tracking the volume fraction across cells in the mesh.  Common examples are free surface flow in ships, large mixing vessels in industrial flow (Figure 3‑1), river flow in dams, channel flow in pipes.  For all these cases, the interface was large and stretched across multiple cells.  Macro scale methods apply to the majority of VOF simulations.

For the macro scale methods, the momentum equations for all the phases get combined.  The entire simulation employs only a single set of momentum equations for the composite fluid.  This works best for cases where fluid mixing is not a concern.  Situations where we are not concerned with the differences in momentum between the two different phases.

The sub-grid method works on the tiny end.  It models scenarios where the interface between fluid phases is smaller than a single cell.  Or at least too small to be clearly defined in 1-2 cells.  Imagine tiny gas bubbles dissolving into a liquid, or one liquid phase diffusing into another.  Those would be appropriate for sub-grid methods.  You see these methods most often in industrial processes, involving mixing of fluid phases.  Particularly gases and liquids where the industrial process intentionally creates miniscule gas bubbles.

For that momentum transfer, this method assumes each fluid phase is a droplet too small to resolve in the grid.  As the CFD engineer, you need to specify the details about the fluid interface so the solver can calculate the moment transfer:

The exact extent of the details depends on your specific solver.  The CFD engineer needs to have an educated guess at these specifics, which is why this method typically only applies to industrial mixing processes.  You need an application where the details can be tightly controlled.

Volume of fluid modeling (VOF) expands the capabilities of CFD to allow limitless combinations of different fluid phases.  The volume fraction allows us to combine different phases into a single composite fluid.  With VOF, fluids mix and dance across our domain.  The world of VOF encompasses everything from droplets of diesel spraying in cylinder all the way up to tsunami waves crashing against the city of Tokyo.  The advanced capabilities of VOF inspire awe.