How to Design a Waterjet: Key Elements of Waterjets

How would you design a waterjet?  Sitting at your 3D modeling program, with a blank screen, what do you draw?  We know water flows in the front and sprays out the back.  But what happens in the middle?  Today we discuss the key elements that make waterjets work, and the correct way to combine those components.

The physics behind waterjets rely on Newton’s third law of motion:  for every action, there is an equal and opposite reaction.  It takes force to accelerate water out the back of a waterjet, and we experience an equal and opposite force that we utilize as forward thrust to drive the boat.  That is the sole and most important principle about waterjets.  Water accelerated out the back equals forward thrust.  But, admittedly, Newton’s laws are fairly abstract.  It can be hard to expand from theoretical physics to practical design; so we should clarify a few points:

As a demonstration this cutoff point:  one company created a levitating hoverboard (FlyBoard), powered by a waterjet from a personal watercraft.  In the video, the direction of the FlyBoard nozzles controlled everything.  Notice that the watercraft barely moved in the background, because all the thrust was directed through the FlyBoard.

3.0 Anatomy of a Waterjet

Strip away all the fancy design and optimization, and a waterjet breaks down into four essential components (Figure 3‑1):

If we look at them individually, each component becomes relatively simple to understand. 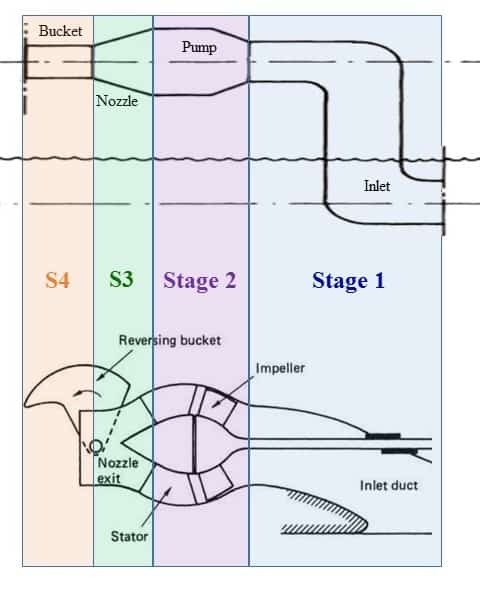 In terms of functionality, the inlet collects water and feeds it to the pump.  Nothing fancy.  The trick is to accomplish this with as little drag as possible.  Ideally, we want the inlet to be a pipe that opens directly into open water and generates zero drag.  Except that’s physically impossible.  Instead, the inlet forms a flush opening with the bottom of the hull.

The shape of that opening needs to be carefully designed to perfectly match the water flow path as the water diverts from moving parallel to the hull and goes up and into the jet. (Figure 3‑2)  The size of the inlet opening controls the speed of the flow at the inlet.  And designers pay special attention to shapes of the corners at the front and back of the inlet.  Computational Fluid Dynamics is the common tool of choice to optimize the corner shapes.  Get those corners wrong, and you generate additional turbulence, which adds up to efficiency losses. 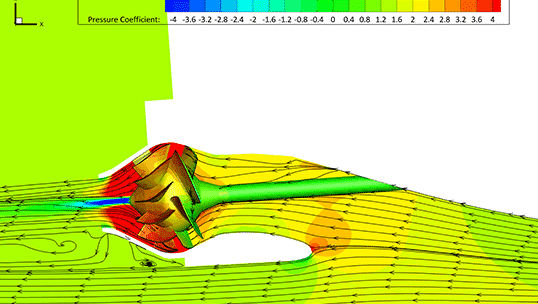 The pump is the heart of the waterjet; it adds power to the flow stream, in the form of increased water pressure.  Water pumps come in many shapes and sizes, depending on how much pressure you want to add, and the relative speed of the pump.  Speed considers both the rotation speed of the impeller, and flow rate of the water.  For most waterjets, the pump will be either a mixed flow or axial flow design of impeller.

The correct word was impeller, not propeller.  As Figure 3‑2 shows, waterjets use different shapes for the impellers, because flow patterns work differently with the water trapped inside a pipe.  We typically see more blades, similar to the design of a jet turbine engine.  And just like a turbine, after the impeller we have a stator, which does not move.  Those static blades remove the swirl from the flow and improve the efficiency of the pump.  A well designed impeller, combined with a stator, may produce pumps with efficiencies of 90% or greater.

Without the nozzle, you don’t have a waterjet.  The pump generates extra pressure, but the nozzle converts that pressure into a jet of fast moving water.  Remember that waterjets work by accelerating water.  The nozzle performs most of that acceleration.  It does this by reducing the diameter of the pipe in the waterjet.  The water still wants to flow at the same rate (volume flow rate) due to all the pressure of that pump pushing behind it.  With the nozzle shrinking in diameter, that leaves the water with only one option.  It must increase its velocity.  As diameter shrinks, the water velocity increases; it accelerates.  And we get thrust.

The final component controls the direction of that thrust, adding maneuvering capabilities to the waterjet.  We generally call this the bucket for short.  This vectors the thrust from the jet, allowing the vessel to steer side to side without a rudder.

The direction control component is optional.  Vessels that install three or more waterjets usually only add the bucket to two of the jets.  The remaining waterjets are called booster jets, and they get installed without a bucket.  This reduces vessel resistance and waterjet cost; a solid win on all fronts. 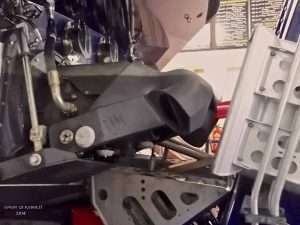 The directional control component also includes a reversing bucket to solve the problem of going backwards, because waterjets don’t have a reverse gear.  Spin the impeller in reverse, and no real thrust comes out the inlet.  Waterjets only work in one direction.  To drive in reverse, we deploy a bucket that catches the stream from the nozzle and deflects it 180° in reverse. (Figure 3‑4)  Not the most efficient system, but ships don’t spend much time in reverse. 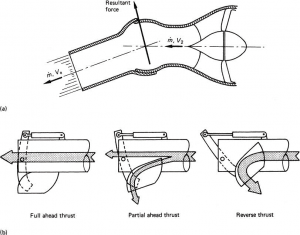 Figure 3-4: Principle of Waterjet Steering Capability (a) and Thrust Control Mechanism (b) [2]

Beyond the basic anatomy of a waterjet, there are some design best practices that go into every waterjet.

The key to a successful waterjet is the optimum balance between thrust and efficiency.  If you try to generate too much thrust by accelerating the water too much, you choke the jet, and efficiency plummets.  On the other hand, too little acceleration, and you under-utilize the jet.  The fancy spinning thing in the water just generates noise instead of pushing forward.  One of the key design parameters becomes the nozzle size.  A bad nozzle may reduce waterjet efficiency to 30% or less.  The nozzle needs to be tuned for the correct speed and thrust.  The key lies in striking the right balance between thrust and efficiency.

This fundamental choice happens early in the waterjet design, and depends on key parameters like impeller diameter, inlet velocity, and outlet velocity.  Not an easy system to optimize.  Thankfully, DMS developed a spreadsheet to quickly optimize the jet design and establish those key parameters.

Practical observations sometimes confuse this rule.  If you walk into a marina and carefully inspect waterjets on boats sitting in the water, you may notice that most of the waterjets rest partially submerged.  They sit half in the water.  This is because most high speed planing vessels create a hollow in the water directly behind their transom when running at speed.  And the hulls will rise out of the water at planing speeds, raising the waterjet a little above the waterline.

In those vessels, the best design practice is to position the waterjet vertically so that the centerline of the jet lies on the vessel waterline when resting.  This ensures the pump of the waterjet can always prime.  That explains the appears of most waterjets in marinas, but remember that they don’t look like that when working on the job.  If you plan to apply this strategy, be sure to check that your vessel actually generates the expected hollow behind the transom.  Otherwise, you just wasted your money on that waterjet.

While considering vertical placement of the waterjet, also remember that we pay a penalty for any elevation change between the inlet and the outlet.  It takes power to move water from a lower elevation to a higher point, which reduces the efficiency the waterjet.  For small changes in elevation, this is relatively minor.  But the penalty for elevation change can be significant in rare cases like hydrofoil vessels, where the inlet may be at the bottom of the hydrofoil, and the outlet rests several meters up at the hull.

The final word of warning:  don’t cavitate the impeller!  If we attempt to generate too large a pressure difference with too small an impeller, we cause cavitation.  Small pockets of water vapor form, and then implode on the surface of the impeller.  The implosions lead to significant damage over time, forcing you to replace the impeller.  At the design stage, check for impeller cavitation and design to avoid it. 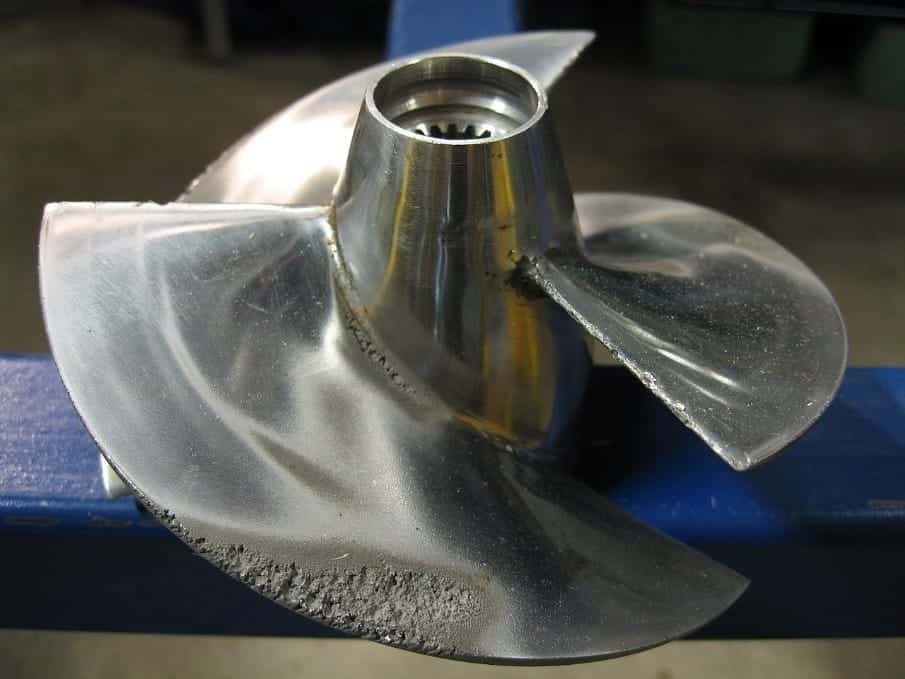 The waterjet also pays a penalty on the vessel itself:  entrained water.  Remember that the ship was designed with a targeted amount of buoyant volume.  But our waterjet contains a pipe full of water, which reduces the buoyancy of the ship.  Rather than counting this as a hole in the ship, most naval architects count the water as an inside the waterjet as an added weight item.  Not a small item either; this chunk of water usually weighs several tons!  That is several tons of cargo capacity denied to the ship.  Remember the weight of the entrained water when designing for installation of a waterjet.

Strip away all the extensive engineering, and the most critical components of a waterjet are the pump and the nozzle.  The nozzle accelerates the water to form the jet.  That acceleration is key to getting thrust from the waterjet.  This is where the engineering shines through.  We need to pick the right nozzle size to generate sufficient thrust, without killing efficiency.  A tricky combination to reach.  Waterjets may appear to be brutes of power, but they rely on delicately balanced design equations.